And With Madness Comes the Light - review 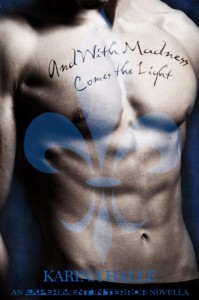 Another foray (ha!) into the mind of Dex Foray - as you can imagine I was quick to snap this one up. And With Madness Comes the Light spans the gap between Lying Season up to the events at the end of On Demon Wings.

Dex is in very a bad place. He has lost the love of his life just as he finally realized he was in love with her. Everything seems bleak and he falls into a deep depression. It is only his friends as Shownet, rallying round, that eventually manage to get him out of his funk. Determined to 'better' himself, Dex embarks on a new regime; giving up the meds, the smoking and (excessive) drinking. He joins a gym and begins working out. Dex knows that he has lost his chance with Perry but is determined to turn his life around.

He is only beginning to get a handle on things again when a phone call from one Ada Palomino throws his life into chaos once more. Perry is in danger and Dex knows he is the only one who can help her. When he gets to Perry's house, and sees her strapped down to the bed in full throes of demonic possession, he cannot believe what has happened to her, what he was somewhat responsible for - albeit unintentionally. Dex is devastated all over again ****spoiler begins****especially when he learns about the baby and Perry's subsequent miscarriage - his reaction here was both unexpected and gut-wrenching****spoiler ends****. However, he knows only he can save her and he is determined not to lose the love of his life all over again, even if she never forgives him for the mistakes he has made in the past.

And With Madness Comes the Light is another fantastic addition to the Experiment in Terror series. I adored getting back into Dex's head and seeing it the events of On Demon Wings from his perspective were even more harrowing if that is possible. Dex just broke my heart in this. He really hurt Perry with his rejection of her but I think he hurt himself even more and that really comes through in this novella. Another must-read for Dex and Perry fans.

I am so looking forward to Come Alive - a full book from Dex's perspective - should be quite a ride!!