Anna and the French Kiss - review 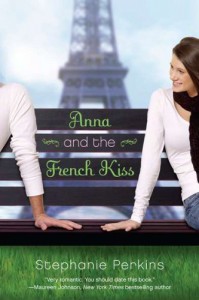 I have had the biggest smile on my face since I finished reading Anna and the French Kiss. It was just what I was in the mood for since I have been going through a spell of heavier, more angst-ridden books lately. I really loved this and now cannot wait to read the follow-up Lola and the Boy Next Door.

Anna and the French Kiss revolves around a girl called Anna (funnily enough!) who has been shipped off to attend a Parisian boarding school in her senior year at the urging of her father. Anna is not happy about having to leave Atlanta. She is leaving behind her best friend and a boy she likes who may have just been about to become something more. She is convinced that she is going to have a terrible time as she does not even speak French and being somewhere unfamiliar and unknown scares her. Her doubts begin to evaporate the moment she lays eyes of Etienné St. Clair. Anna is instantly attracted to Etienné however he has a girlfriend so is off-limits. Anna has a 'something' back home too so she tries to bury her feelings for Etienné and settles for becoming a close friend instead. Anna is also welcomed by his close-knit group of friends and she soon begins to find that Paris may not be so bad after all. Anna is a total film-buff who has aspirations of becoming a film critic and she finds the city, with its love of cinema, just the place she needs to be.

Anna begins to get closer and closer to Etienné, who seems to like her too. However, despite this Etienné will not move on from his girlfriend Ellie, even though it is clear they have been having problems since she graduated and went to college. Anna and Etienné dance around each other the whole year, but will they ever admit to their true feelings or are they destined for a series of missed opportunities - never getting the chance at something more substantial?

Anna and the French Kiss was a little gem of a book. It was light, it was frothy, there was nothing new about the story but boy did I absolutely love it! This book had moments of angst sure but overall it was such a cheerful and feel-good read. I loved Anna, her insecurities felt real and I liked the fact that she was a bit of a neat freak. She liked order and respected authority but never in a total goody-goody way. I liked her passion for movies and the way she cared for her friends. Etienné - I just loved him. He was swoon-worthy but he was far from being perfect. He was a flawed character - he could be a little bit weak and I wanted him to man-up and just follow his heart. It did make him a little bit frustrating but like Anna I could never remain mad at him too long. He was just too charming. I liked how, although he was described as good-looking, he wasn't your typical young adult love interest. He was, in his own words, a short-arse but it certainly did not stop all the girls at school falling all over him.

Although this book had its flaws, I actually felt it was all the more charming for it. I was swept up in the story and was really rooting for Anna and Etienné to get their HEA.