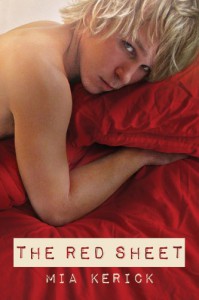 The Red Sheet by Mia Kerick was a thoroughly engrossing read. I would go as far to say it is my favourite book that she has written so far (and that is high praise since I really adored Intervention and Not Broken, Just Bent).

This is the story of high school jock Bryan Dennison. Bryan is not a nice lad. He is a bit of a bully in fact. He is one the popular crowd, full of himself and his place in the social sphere of his small-town high school. Yet one day Bryan wakes up with a strange urge: to buy himself a set of red sheets. He also becomes environmentally conscious, helpful to strangers, and a rescuer of kittens. He offers to do chores for his mother and his neighbours, he wants to help little old ladies across the street and basically right the wrongs of the world. He becomes something of a superhero.

Yet, there are signs that something is not quite right. Bryan is having trouble remembering what he was like previously. He can remember being a bit of an ass to people but he has no idea what actually spurred on that behaviour. On his first day back at school after his ‘transformation’, Bryan sees Scott, an openly gay kid, being picked on by his group of jock buddies. Bryan stands up for Scott but Scott is anything but appreciative.

Scott wants nothing to do with Bryan at all. Bryan is perplexed by this. He cannot remember Scott at all but finds himself becoming more and more drawn to this brave young man. It soon becomes clear he is more than a little infatuated with Scott. Scott on the other hand keeps pushing Bryan away, hinting that something terrible had happened between them previously of which Bryan cannot remember.

As time goes on and Bryan proves to Scott that there is more to him than the facade he seemed to wear previously, Bryan struggles to piece the puzzle of his disjointed memories together. He must if he is ever to have a chance with Scott, who is still having trouble trusting the reformed jock. As Bryan slowly gathers evidence of what happened between them, he realizes that he may just have committed the most heinous of betrayals…

This book was very powerful and affecting. It really conveyed bullying in an extremely realistic way even if it was a little bit disturbing in its realism. By that I mean that some scenes I really wanted to cover my eyes and ears until everything was all hunky-dory and happy again. I was bullied when I was younger (not for being gay but bullying is bullying regardless of what the so-called reasoning behind it is) so some of the scenes were extremely uncomfortable for me. Mia Kerick is a great writer – she really makes you feel that you are there along with the characters, being targeted for being ‘different’. Bullying is a truly terrible thing. It leaves scars that are with you for life but it is possible to try and grow strong for the experience – which is what eventually happens here.

Scott was a great character. Picked on for his smaller size, uncool clothes, and his sexual orientation he nevertheless has a great deal of inner strength even though the bullying he suffers really does take its toll on him (I am not going to give too much away here but suffice it to say what happens to him left me feeling horrified and sick). Bryan too develops throughout the course of the novel. Even when the reason for his complete change of personality is revealed, he faces up to what he has done and becomes a better person for it.

This is a story of forgiveness, courage, and redemption. Bryan has to become someone else in order to truly be the man he wants to be. Scott has to grant forgiveness in order for Bryan’s redemption to be fully realized. They both have to have courage. Although I do feel that in some ways Bryan did not deserve to be forgiven for his treatment of Scott, by the end of the book it is clear just how much his behaviour has hurt both of them and you cannot help but admire the fact that he has the strength enough to change.

Although the theme of the book was heavy, it was far from being a dreary read. The humour practically leapt from the page. There were many funny situations that Bryan found himself in and his escapades had me laughing out loud several times. The serious subject matter was always treated with the right amount of sensitivity but at times the humour was sorely needed relieve some of the tension.

Mia Kerick is fast becoming one of my favourite authors. I have yet to be disappointed by one of her books. I cannot wait to see what she has in store next!