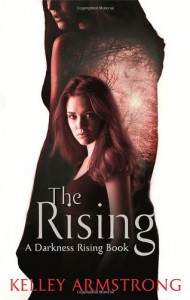 The Rising, the concluding chapter of the Darkness Rising Trilogy by Kelley Armstrong, found its way into my mailbox on Saturday. A nice surprise since it is not due out until 2nd April (must have got it early due to being the bank holiday weekend for Easter - yay!!). I have been eagerly anticipating its release so didn't waste any time in setting about reading it. I was not disappointed.

I enjoyed the first two books in the series (The Gathering and The Calling respectively) but I did not feel as much of a connection to the characters as I did for the gang in The Darkest Powers Trilogy: Chloe, Derek, Simon, Tori et al. However, this book really turned that round for me. The Rising picks up where the last book left off with Maya, Daniel and Corey split off from the rest of the group, who have been captured by Maya's biological father Antone (who is working alongside the Nast Cabal). All they have is a name given to them by Rafe, of someone who knows about the Phoenix Project and who might be able to help them.

This proves to be a bust when they discover that the man in question, Cyril Mitchell (I was a bit disappointed that the name they had been given wasn't Derek and Simon's dad Kit but I suppose that would have been a bit too neat a plot turn), has died and his daughter is less than helpful. The three teens decide that their only hope is to approach their parents for help. Only trouble with that idea is that their parents think they are dead and they are being closely monitored by the Cabal. The only chance they may have is by trying to attend their own memorial, which is being held in Vancouver, and get their family's attention somehow.

Before they can do that though, they receive a message, supposedly from Cyril Mitchell's daughter, urging them to set up a place to meet. When they go to this meeting, they instead find Maya's long-lost twin brother Ash (whom Maya only learned about in The Calling). Ash is willing to help them, albeit somewhat reluctantly but thinks that going to their own funerals is a terrible idea. Ash is soon proven to be correct. Maya and Ash are separated from Daniel and Corey and it is not long before Maya is captured. Maya is taken to a facility where the rest of her friends (including Rafe) have been detained. Maya and her friends will soon need to make a choice. Just who is the real enemy and what will they need to compromise in order to win their freedom?

This book was a real whirlwind of action from beginning to end. The Calling has been criticized for having a lot of (seemingly) aimless wandering about and, to be honest, there is a lot of travelling in The Rising as well. However, there was no filler at all. The plot was exciting and there was a sense of purpose that was perhaps lacking in the first two books (or maybe it was just harder to see before). I think many people will be happy with the resolution and it was great seeing Chloe, Derek and the rest of the gang back.

Maya has really grown as a character for me. I found her quite hard to relate to in The Gathering but was starting to warm up to her in the second book. Well she has really won me over now. I found her slightly arrogant and a little condescending previously but she has really matured as a character and stepped up as a leader, more so for recognising her own weaknesses and flaws. I have always loved Daniel and that hasn't changed for me with this book. He is still the same loyal, dependable guy that he was before and he has become Maya's rock, her beacon of strength. I honestly do not think she could ask for a better best friend. Rafe was every bit as charming as he was in the previous books but he too has grown in strength of character and I was happy to see him reunited with his sister Annie ****spoiler begins****who is now starting to recover from the regression brought on when she started shifting - due to some help from the Nast Cabal's scientists****spoiler ends****. Corey is a great character and I would have loved to have seen a bit more of him. We do finally find out what his supernatural type is though and it's a doozy! Hayley and Sam do not get a lot of page time but I liked seeing them again, even in their limited capacity. I would be remiss not to talk about Ash though. I really loved Ash. He reminded me a lot of Derek but snarkier and even more surly at times if you can believe that. He has had a difficult life and as a result finds it very difficult to trust or let people in. I liked though that behind his tough-guy facade he genuinely wanted to help Maya (and by extension her friends). I wish he had been introduced earlier, but I suppose that wouldn't have made sense story-wise. The old gang from The Darkest Powers series were also well integrated into the story and I loved seeing them all again ****spoiler begins****and seeing Maya and Daniel eventually become friends with Chloe and Derek. Derek finally has a friend - yay!)****spoiler ends****.

The love triangle is finally resolved and I felt that the resolution made perfect sense, even though I liked both Rafe and Daniel ****spoiler begins****I had a feeling it was always going to be Daniel though. He has always been there for Maya and they have such a powerful connection which has only been growing over the course of the series. I was glad that Maya finally got a clue about Daniel's feelings for her though she had to be told by various characters before she really accepted the idea. I also like that it wasn't until the epilogue that she decided to move her relationship with Daniel into new territory. For one thing, romance under peril didn't make sense for the two of them, plus Maya had to make sure that she really knew what her feelings were for him. She had spent so long thinking him off-limits that it would be hard to shake that and it's clear she needed time to process this. She also had her feeling for Rafe to consider as it's not as though she stopped caring for him overnight. It is shown that her feelings for Rafe started to change into friendship ones only and although I felt bad for him, I was glad that it was Daniel who got the girl in the end****spoiler ends****. I normally hate love triangles with the fire of a thousand burning suns but for some reason this one never really bothered me. I think it is because Maya herself is not the type to waffle between two guys, she isn't even aware of Daniel's feelings towards her until the latter half of the book.

The ending took me by surprise but at the same time it didn't. The two groups (from both trilogies) couldn't stay on the run forever so what they agreed to in the end made sense. It has also opened a lot of possibilities for future development if Kelley Armstrong does decide to return to the world again (not the near future though - the teens have a lot of growing to do first!). There were a lot more allusions to characters and events from the Women of the Otherworld series ****spoiler begins****Lucas and Savannah get mentioned a few times, as do the Syracuse pack, and it is Sean Nast that they negotiate with at the end which made me very happy as I really, really love Sean. Chronologically, the events in this book seem to take place a year or so before the events of Waking the Witch through to 13 which I found interesting to know****spoiler ends**** and that too made me really happy. Who knows - maybe the characters from each series might collide at some point in the future. I really hope they do - not quite ready to say goodbye to this world altogether.