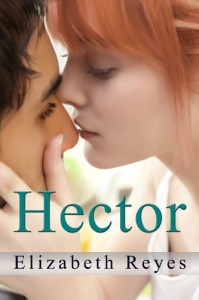 After the emotional roller coaster that was Gio I was a tad reluctant to read Hector even though he is my favourite of the 5th Street boys. Gio was a hard book to get through but I am pleased to report Hector was a much more satisfying read for me and had all the charm that the first book had, in spades.

Hector Ayala is the youngest of the 5th Street gang. He is cocky and abrasive yet also charming. He does not believe in settling down and has a reputation as a bit of a womanizer. However, Hector did not figure that he would meet a girl like Charlee, who is different from the many (many) girls he has known in the past. Charlee Brennan is a shy and somewhat reclusive college student. She has secrets in her past which have made her very wary of trusting men so when she meets Hector, although she is almost magnetically drawn to him, she doesn't know how to deal with the feelings he brings out in her. Hector is equally drawn to Charlee, although at first he cannot admit it. A boy that he knew in high school, Walter, also has feelings for Charlee and asks Hector for help in getting her to notice him. Hector feels guilty for something that happened to Walter in high school so he initially agrees to help Walter out.

Hector soon finds it difficult to keep away from Charlee and after they share a passionate kiss, he puts walls up to try and push her away. Charlee is hurt by his rejection and tries to act as though it doesn't bother her but the two find it difficult staying away from each other, especially since they are both on the same chess team (sexy or what lol). Things eventually come to a head and the two of them finally give into their mutual attraction. However, Hector's past and Charlee's insecurities soon rear their ugly heads. Will they be able to let go of the past and truly make a go of a future together?

This novel was a little bit more ya-oriented than the first two books in the 5th Street series (which makes sense given the ages of the protagonists) and the characters definitely acted a lot more immaturely at times. Some of the misunderstandings would have been sorted out a lot sooner if they had just sat down and talked to each instead of running away from each other. Still, I absolutely loved Hector (he showed a hidden softie side which I knew the boy had in him!) and Charlee was a sweet if somewhat quirky female lead.

I really enjoyed Hector and devoured it in one sitting. The characters were lovable and I was really rooting for them to get over their issues and make a go of it. I think Hector and Charlee really complemented each other well and their romance was sweet without being overly sentimental. I also liked seeing the other characters as well. I cannot wait to read Abel's story as he is for me the mysterious one that I haven't really gotten to know as well as the others (although I have a very good idea about who he is going to end up with - if the hints in this and previous books are to be believed!).