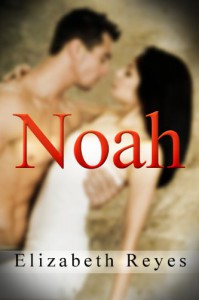 I got Noah free on kindle so I wasn't too sure what to expect but I ended up thoroughly enjoying this sweet, romantic story about two very different people finding each other and falling in love.

The two leads are Veronica (Roni) and Noah. Roni is 28 and overweight. She nursed her mother through a long sickness and after her mother died, Roni found herself comfort eating to help cope with her loss. She has sunk into a deep depression and cut herself off from most of her friends. She gave up her work when her mother got sick and she cannot bring herself to return, even though the door is open for her anytime. Her best friend Nellie decides enough is enough and drags Roni to a nearby gym after receiving two free week-long passes. Noah is almost 20. He is a boxer who practically lives at the gym on 5th Street. He is eager to show the owner Jack that he could be a trainer and practically jumps at the chance to prove himself. He didn't expect to be training two women, especially one like Roni who clearly is very uncomfortable being there.

However, Roni realises that she needs to get her life back and that she has to start by getting back into shape again. She decides to give training at the gym a shot. Under Noah's tutelage, Roni is soon shedding the pounds. The two slowly begin to form a friendship which is solidified when Roni offers Noah a room in her house after his roof leaks and leaves quite a bit of damage behind. The attraction between the pair is palpable but Roni is reluctant to start anything with Noah. She is still getting over a failed relationship and she also has qualms about how young Noah is compared to her. Noah has no such reservations. Although he is younger, he has had a difficult life. Growing up as a foster kid has left him mature beyond his years and he is desperate to prove to Roni that he is the one for her.

Eventually things come to a head and the pair can no longer deny what they feel for each other. However, things are not smooth sailing. Both have to learn to trust each other, especially with obstacles such as Roni's persistent ex-boyfriend turning up and trying to come between them. There are also secrets from Noah's past that threaten the delicate balance of their burgeoning relationship.

I really enjoyed Noah. The characters were both endearing and frustrating but definitely real and relatable. Roni was going through a tough time and Noah really helped her to get back on her feet again. His friendship was a real lifeline for her which is another reason why she was reluctant to enter into a romantic relationship with him as she also fears that if it doesn't work out she would lose a a really good friend. Noah is some respects is the more mature of the pair (Roni comes across as a little sheltered and naive). He doesn't see the age difference between them as a problem at all, at one point citing "...if there’s one thing I’ve learned my whole life, time and age are but an illusion". He is willing to fight for Roni and although he is at times very 'alpha male' he is sweet and charming at the same time. The chemistry between the two, once their relationship finally gets going that is, is off the charts and really lifts the second half off the book for me. The first half was good, the second half was scorching hot!

A very enjoyable read. Excellent main characters not to mention a whole host of really great side characters that I really want to see more of (luckily there are more books in the series - with more to come hopefully!) As soon as I finished Noah I rushed to purchase Gio and Hector.