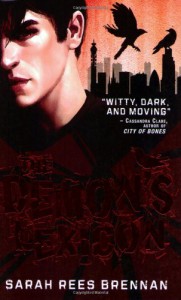 After reading Unspoken, which I really enjoyed, I was determined to go back and read Sarah Rees Brennan's earlier trilogy, starting with The Demon's Lexicon.

The Demon Lexicon is the story of Nick, a sixteen year old boy, who has spent his whole life on the run from the magicians who threaten his mother's life. Along with his elder brother Alan, Nick has held the household together after the death of his father a number of years ago. Nick is an unusual protagonist. He is very hard to get to know and like, given that he doesn't seem to like anybody he comes into contact with. He has difficulty relating to people, and views them as either a burden or an obstacle. The only person he has any time for at all is his older brother Alan, who has been his only protector and confidant all his life. Nick protects his brother and Alan is the only person Nick feels any loyalty towards.

Their lives are turned upside down by the arrival of Mae and Jamie, a pair of siblings who come to them for help. Jamie has a demon's mark which has put his life in danger and Mae is determined to help her brother at all costs. Nick resents their arrival, especially when it turns out that Mae is the girl his brother has been crushing on. Nick does not want Alan to have any distractions and when they are attacked, and Alan receives a demon's mark of his own, Nick is furious with the interlopers. Alan however, is determined to help the pair and not just because he has feelings for Mae. He genuinely likes to help people and he becomes protective of Jamie. The four end up teaming up as it turns out their is a connection between what has happened to Jamie and who is attacking Nick and his family.

This was a fun, engaging and exciting novel. Nick was a bit difficult to like at first but the other characters more than made up for it. I really liked Alan, a very intelligent but also decent and understanding character. Mae and Jamie, siblings who share a very sweet and genuine bond, were also very endearing characters. Nick, although certainly not very likeable, was a very different change of pace as a main character. He is difficult, cold and uncaring for the most part but does not come across like a robot in any way. You feel his emotions, even though he seems to be void of any real feelings towards others.

The book moved forward at a very brisk pace and I found once I started really getting into the story it was hard to put down. Sarah Rees Brennan also really managed to surprise me with a humdinger of an ending too. I really did not see it coming. Overall, I enjoyed this book and I am looking forward to reading the sequels.