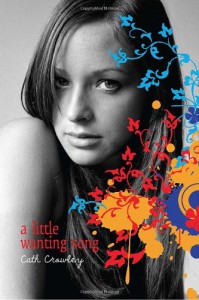 A Little Wanting Song by Cath Crowley is a little gem of a book. In many respects it is a pretty typical coming-of-age tale but the characters elevate this story beyond the usual. They are very realistic and relatable, even if you don't particularly like them at times.

The story is told in dual narrative, from the perspective of Charlie Duskin and Rose Butler, two teenage girls from different backgrounds. Charlie is from the city, Rose is a country girl. Both have difficulty fitting into their lives for very different reasons. Charlie comes every summer with her father to spend time with her grandparents in their small country town. This summer is particularly hard for Charlie after the death of her grandmother. Charlie also lost her mother at a young age and her father doesn't pay very much attention to her. As a result, Charlie has grown up still very shy and awkward. Although back home she has one very close friend, she has difficulty connecting with people and never really lets anybody get close to her. She is secretly a very talented singer/songwriter and some of the chapters are the songs she has written.

Rose is the polar opposite of Charlie. Very outgoing and outspoken, she spends most of her time with her two best friends Luke (who is also her boyfriend) and Dave. Rose is desperate to leave small town life behind. She feels claustrophobic and longs to get out there and see the world. A scholarship to a city school may just be her ticket out. Rose has never had any time at all for Charlie, who has always longed to be a part of their little group.

Charlie has watched them from afar every summer but has always been to shy to try and integrate herself into their group. It doesn't help that Rose (and Luke to an extent) have always been very antagonistic towards her, calling her names like 'Charlie Dorkin' behind her back. However, Rose decides this summer to try and befriend Charlie for reasons of her own. This confuses Luke who can't believe Rose has so changed her opinion about the weird city girl. Dave on the other hand is suspicious of Rose's change of heart but also pleased. He has always seen something in Charlie and is glad of the opportunity to get to know her better.

I instantly connected with Charlie, but initially Rose was very off-putting. She seemed overly critical and harsh, especially with Charlie but also with regards to her parents. However, as the story progressed and you got to see inside her head a bit more, you can fully understand why she is like this. By the end of the novel I was rooting for Rose almost as much as Charlie. Dave was another character I liked though I wish he had stood up for himself a bit more. Luke was a typical lad really. Always in trouble but he also showed a more sympathetic and caring side towards the end of the book.

Overall, a very well written and engaging book. I didn't enjoy it quite as much as Graffiti Moon but it was still a great character-driven story.