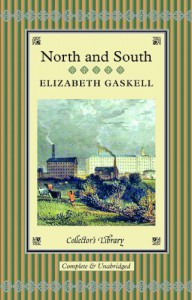 I had already seen the BBC production of North and South (many, many times!) before reading this book so had a good idea of the story and the setting. North and South, in some respects, is like a grittier version of Jane Austen's Pride and Prejudice (another book and TV adaptation that I love). The story and characters are deep and full of imperfections which is why I think I can relate to this story so much, even though it was written so long ago.

I really do love the BBC adaptation of North and South (and Richard Armitage as Mr Thornton is definitely swoon-worthy) but I loved the novel for the greater complexities it gave to the characters. Margaret Hale is a character I have found hard to relate to in the adaptation but reading the book helped to understand her motivations (although I cannot really fathom her great dislike of Mr Thornton in the book - the TV version at least gives some sort of reason for her initial aversion of him).

In some ways, it may have been better if I had read the book first, as comparisons between the book and the show are inevitable, and I find it easier the other way around to not always think of the book when I am watching a televised/film version. Still, I very much enjoyed the novel. The writing was beautiful but concise, and the characters are layered and realistic. The story is on the surface a simple one, but has all sorts of political and social themes playing in the background which are still relevant today. The love story, between Margaret Hale and John Thornton, is believable because both parties act irrationally and willfully at times. The go through periods where they quite dislike the other and the resolution of their love story at the end is hard-won and heart-warming.